The SHREE BHAGWATI make Plough Shear Mixer machine consists of transmission heavy duty mechanism, horizontal drum with inlet and outlet systems, plough and fly cutter. The product material flow forwards in axial direction along the drum shell by the force from the plough. The materials will be thrown to all directions by high  speed rotating fly cutter when pass by it, achieve uniform mixing in the shorter time.

SHREE BHAGWATI make Plough Shear Mixer machine It is widely used in construction material, chemicals, medicine, agricultural medicine, food, feed and feed additives, yes, paints, plastics and other industries, such as solid - solid (powder and powder), mixed solid-liquid (add a small amount of powder in liquid) and wet granulation, drying and composite technology. It is especially suitable for the mixture of viscous or rubbery additives. 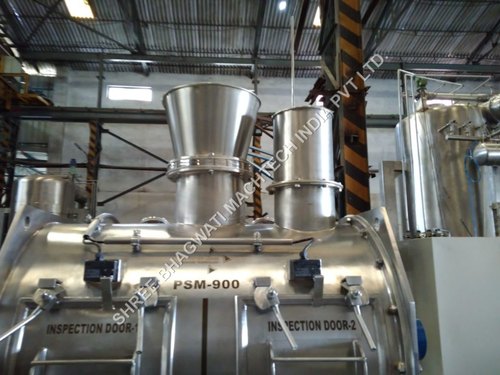 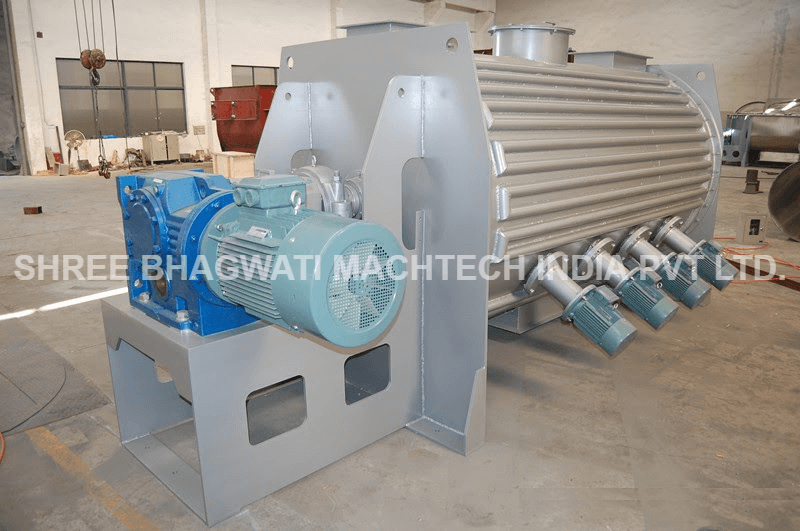 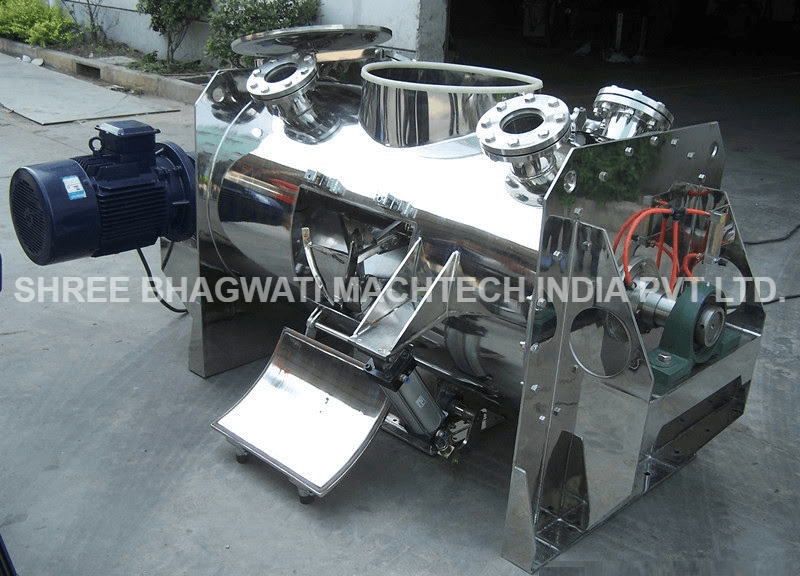 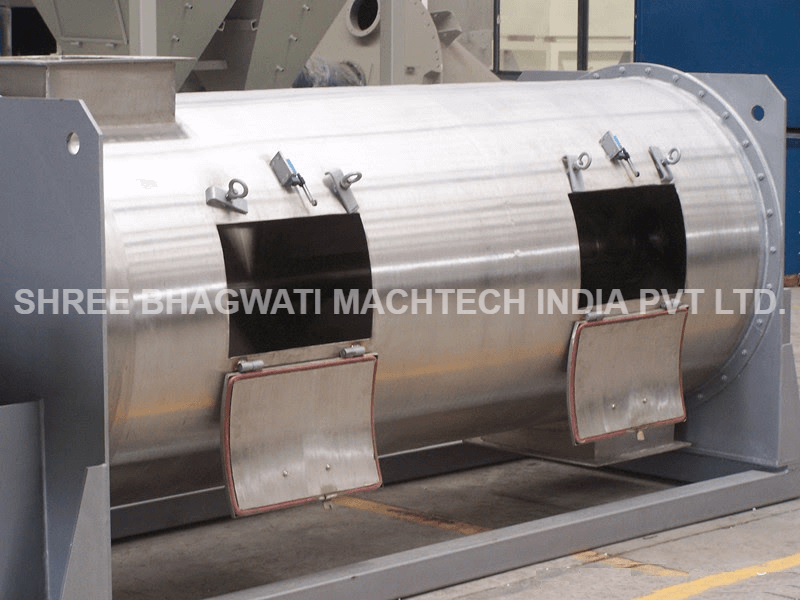 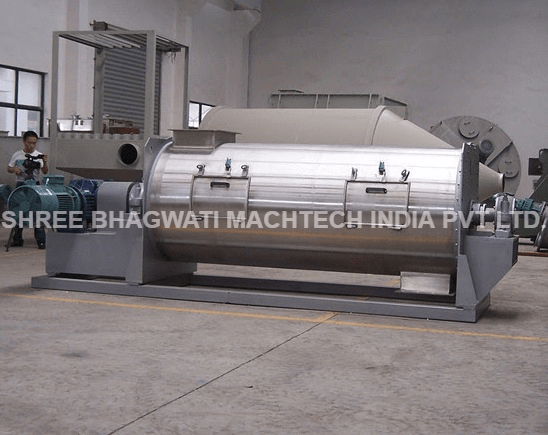 Ploughshare Mixers are perfect for admixture powders and granules and canbe used for light-weight paste-like or cream substances. The mixer is based on an examined intermixture creation that has a double admixture movement making certain short and competitively priced blending.

This is a horizontal mixer including a horizontal, cylindrical instrumentality enclosure plough shaped admixture components hooked up on a horizontal shaft.

The blending result is extended with the aid of using separately driven, excessive-velocity rotating choppers or a couple of choppers, that during cooperation with the plough shape admixture additives, disperse the lumps and agglomerations or pasty components with the powdery carriers.

These Mixers are provided with liquid feeding devices, jackets for heating/cooling, choice of seals, vacuum suitableness for drying, and sundry materials of creation (like mild-steel, stainless-steel, Hastelloy, Monel) to match the approach substances. The Mixer is moreover given a solvent recuperation system.

Plough shear mixer is hugely applied withinside the combination of chemical substances, pigment, scientific distinctiveness substances, and feedstuff, especially in the combination of fragile stable grain; in a completely quick time, the mixer has clever excellent blending for the substances that include a pleasant difference in grain and density.

Plough shape shovels hooked up on an important shaft with their intendeds are penetrable via the dense powder mass at some point of a cylindrical drum or a vessel.

The batch plough shear mixer is the maximum flexible mixer type supplied with an in-intensity type of applications:

Mixer shaft in a horizontal, cylindrical drum. The size, variety and positioning, geometric shape, and peripheral velocity of the mixing. Plough Shear Mixer Shuffling of the combination is performed with the aid of using the wider end of the shovels.

Penetration observed with the aid of using the agitation of the mass in a quick succession of the specifically designed blades ends in the homogeneity of powder mass every in dry and moist stages. Applicable dough formation is reached in a later approach.

A centrally hooked up chopper will then perform to get moist granules of uniform size. The combined equal mass is discharged from the lowest of the mixing drum that is provided with a flush-match discharge port.

One of the advantages of the plowshare mixer is that those admixture instances range little or no among the various gadget sizes. The mixer is fed from on top. In smaller, mainly manually operated mixers, this includes an outsized guide to get entry to purpose. In the case of gadget-managed manufacturing systems, the uncooked substances come again from upstream silos, scales, or comparable dosing instrumentation and arrive in the mixer thru one or many pipes. The mixer is discharged from the rock backside of the drum.

This evaluation will let you amplify your commercial enterprise with the aid of using concentrating on the certified area of interest markets.

Material can be carbon steel, manganese steel, ss304, 316L and 321; besides, different material can also be used between the part contact with the raw material and the parts don’t contact with the raw material. Surface treatment for stainless steel include sandblasting, wiredrawing, polishing, mirror polishing, all can be used in different parts of a mixer.

The plow heads in the plough shear mixer can be dismountable, which is convenient for replacement. Wear-resistance treatment is done on the plow, making the plow more durable to the severe wear conditions. Different main shaft agitators can be equipped according to the properties of raw materials.
Main shaft agitators: ordinary plough, saw-toothed plough, and shaver-shaped paddle; High speed chopper: multiple-piece cross blade, double-piece lotus blade.

Mixer is equipped with many auxiliary components, like steam coil jacket, honeycomb pressure jacket, medium circulation jacket, sampling valve, high speed chopper, temperature sensor, weighing system, dust removal system and so on. Different heat medium requires different jacket, it can be used for heating and cooling, while, the temperature should be within 250 Celsius degree. If a small quantity of liquid is required during mixing, spraying or atomizing unit is necessary in order to mix the liquid evenly with the main ingredient. The liquid-adding system is basically composed by the three parts: pressure source, liquid storage pot and spraying nozzles.

Configuration 1: using crane to hang bigbag material and feeding the mixer with the help of dust collector.

Configuration 3: simple mixer frame, feed a discharge directly with the help of a folk lift.

Configuration 4: using manual feeding platform, after mixing, screw conveyor send the material to the production silo, a packer under it.

Configuration 5: using vacuum feeder, load the material on the ground, after mixing, pack with a bulk-bag packer.

Configuration 6: multi-stage vacuum feeder, store it after mixing, then packing. 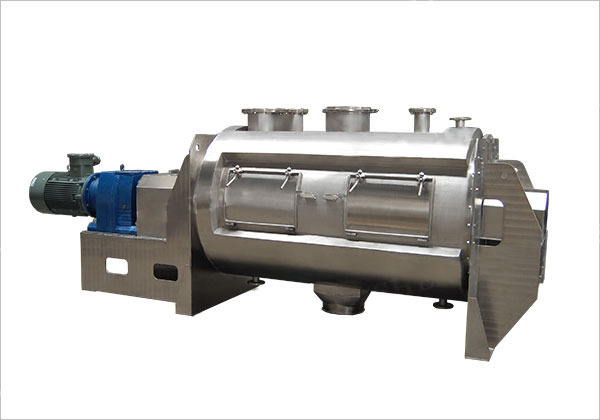 Plough Mixer is a high speed mixer with high homogeneity. During the mixing process, the raw materials are transferred around the drum in a radial, lateral and longitudinal movement by the high speed plough shears and choppers. Moreover, the mixing time is short, especially for free flowing powders or granules. Liquid additive and Heating or Cooling is also applicable.

In the first case the mixing shaft and the tools are horizontally installed, thus achieving, at corresponding movement, a product reaching from a loose product bed up to a mechanically generated fluidised bed. In the second case the mixing shaft is installed in vertical direction, whereby a socalled vortex is built at corresponding movement. The installation of fast-rotating chopper heads enables the mixing of products tending to lump formation. Due to the mixing tools, the material to be mixed is hereby specifically fed to the activity area of the chopper head. Besides the conventional ploughshare mixing tools a large variety of modified mixing tools is available, facilitating an optimum adaptation of the mixing tools to the individual material. 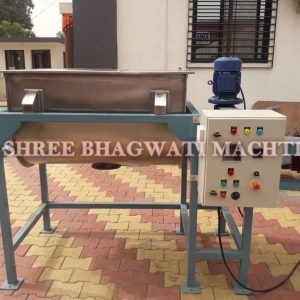 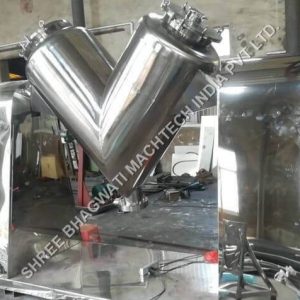 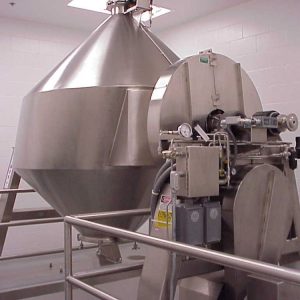 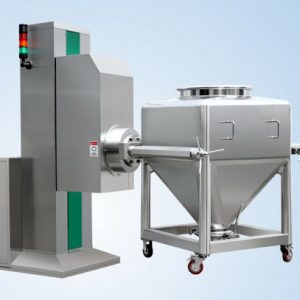 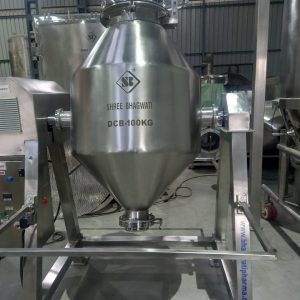 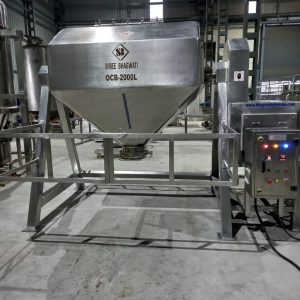